We are so excited to share that the conclusion to the Lawless siblings novels is now LIVE. This story kept us captivated from the very beginning with Riley's story in Ruthless, through Bran's story in Satisfaction and we cannot wait to hear what everyone thinks of Drew's story. Be sure to check back later this week for our *spoiler free* review! 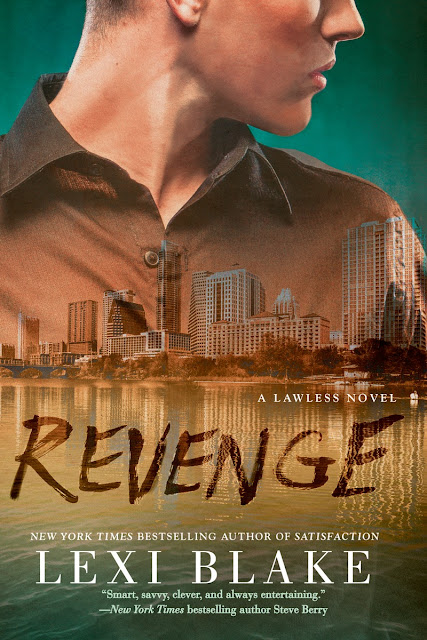 Passion and danger collide in the latest contemporary romance featuring the Lawless siblings—from New York Times bestselling author Lexi Blake.
When Drew Lawless discovers a fatal flaw in his plan to avenge his parents’ deaths, he turns to the one woman he promised he wouldn't touch. He offers her a deal, one that will bring her into his investigation, his life, and his bed.
Investigative reporter Shelby Gates never dreamed how twisted the case would become—or how fascinated she would be with Drew. Every day they spend together binds them. And every night brings her closer to realizing he might be the man for her.
As Drew's feelings for Shelby grow, so does the danger. From the streets of Dallas to Austin’s high-tech business world, Drew and Shelby play a game begun twenty years before—a game they will win, or die trying.

Shelby brushed her lips against his, her whole body seeming to come to life. His lips were soft, his hands tight. He was enveloping her and she was completely defenseless against him.
She wrapped her arms around him as the kiss deepened, and suddenly she didn’t want to play it safe anymore. She’d been in her shell for so long and she wanted to come out of it, wanted to feel again. She dragged her tongue over his lower lip, and it seemed to awaken the beast in Drew.
He took over, the kiss going from sweet to carnal in an instant. His mouth opened, tongue sliding over hers and dominating with strength and a sensuality she’d never come across before. He kissed her long and hard, his hands molding to the curves of her body. Over and over again his tongue danced with hers. Never before had a kiss seemed so effortless. It was like they’d been kissing forever.
For a man who claimed he was socially awkward, he sure could kiss like a god.
It was getting out of hand, but she didn’t care. Nothing mattered except getting more of him. She could feel his cock under her, hardening, lengthening, getting ready for what it was meant to do. He could ease her back against the table, pull off her jeans and panties. It would be incendiary, like a rocket going off, an explosion she couldn’t contain. She could feel herself getting soft and wet and ready for him, as though her body had recognized its natural mate and wasn’t taking no for an answer.
“See, I told you we have chemistry.” His words rumbled along her lips.
She couldn’t argue with him. The world around them seemed hazy and unreal. There was nothing except his touch and scent and the sight of his eyes looking at her like he could eat her up. She knew she should stop him, knew it was getting out of control, but she couldn’t find the will. It had been so damn long since she wanted something she could actually have.
She wanted him.
Shelby let her fingers sink into his hair, drawing him back down. Breakfast could wait. She needed more of him.