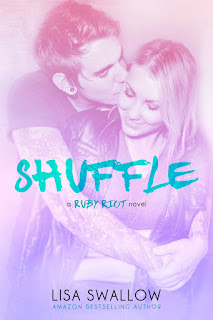 Will Campbell, Ruby Riot bassist, is back at university and failing badly at everything apart from partying.

With Ruby Riot on a break, Will returns to university to finish his degree. He needs major help if he wants to pass his final year and attempts to join a not-very-rock star study group. Will is horrified to discover the person organising the group is Fleur Roberts, the girl he’s secretly crushed on for two years and who recently threatened him with a restraining order.

Fleur’s rock stars are history academics. She has no interest in any variety of pierced, tattooed slacker, especially not the jackass rock star who humiliated her at a party. There’s no way in Hell that Will Campbell is joining her group.

Faced with losing the easiest way to fix his academic problems, Will has the perfect solution: pretend he’s his twin, Nate. Will and Nate have swapped identities before so nothing can go wrong. Surely.

Fleur is successful academically, but her love life is a failure. Following a number of disastrous dates, she finds herself falling in love with a guy who is lying to her. But Will’s deceit isn’t the only thing about to shatter her world. When another man Fleur trusted betrays her, and she attempts to retaliate, Fleur discovers how dangerous he is. And when Will becomes involved, the repercussions threaten both of their futures.

Shuffle is the second standalone book in the Ruby Riot series and can be read separately to the first book.

(every ‘Nate’ who is in the excerpts with Fleur is Will)

“I went to that history study group.” I turn and pull open the oven door, face blasted by hot air and the smell of burning cheese.
“Any good?”
“Yeah. Smart kids. A couple of them seem cool.”
“So what’s the problem?”
I drag the tray out and dump the pizza on the cardboard trays. Nate passes me a knife and I hack them into slices. “Remember the party the other week? The one I kinda made a dick of myself at with that chick.”
“Which one? There’ve been a few incidents.”
I scowl. “The history class chick. Fleur. She organises the group.”
“Ah. Her. You won’t be going back again.” Nate shoves a slice of pizza in his mouth.
I lean against the counter and tap my teeth. “Yeah, but you’re right. I have to find extra help. I need to go back to the group.”
“Whoa. So she accepted an apology? Fleur was ready to rip your head off that night. She told me if you ever go near her again, she’ll take out a restraining order. I think she was half-serious too!”
“I didn’t tell her who I was.”
“I’m sure Fleur knew damn well who you were after your dickhead moves the other night. People know who we are; we’re not exactly hard to spot.”
I stay silent and watch for the penny to drop.
“Hang on... Will, did you tell her you were me?”
“Might’ve done.”
Nate drops his pizza on the plate. “Fuck, Will! We don’t do this anymore. Only for swapping classes. We agreed.”
“There’s no way she’ll let me in the group if she knows who I am. She hates me, but she’s not bothered about you.” Nate doesn’t respond, but the look on his face says everything I need to know. “C’mon, Nate. It’s not like I’m going to do anything apart from suck up to her for help an hour a week. She’s practically a teacher; it’s no different to us going to class as each other.”
“We said no more lying to chicks! The fall out isn’t worth it. This is the kind of shit the press gets hold of; we were warned after the incident in Brussels. Man...”
“Nate. Help me out. I can’t fail more assignments. A few weeks until I’m on top of my grades, then we’ll only see her in class. She’s never noticed the difference before.”
“You think? If she’s smart, Fleur might figure this out.”
“Nobody ever does.”
“Better keep your shirt on then,” grumbles Nate, indicating my chest with a slice of pizza.
Our differences are self-inflicted, different tattoos. Mine’s a dragon, Nate’s is a row of skulls. “I’m not going to take it off; why would I?”
“Dunno.” He smirks to himself. “She could’ve heard about my moves, might tear your clothes off one day.”
“Fleur’s not interested in me. You. Us. Whatever.”
“Hey, it’s you who pissed her off!” He devours his slice of pizza and I give him my best pleading look. “Fine! Keep her away from me if you do this.”
I straighten. “Is that a yes?”
“Yes, you can steal my identity for the study sessions, but only because I don’t want you to fail.”
“Naw!” I grab Nate’s head and kiss his forehead. “You rock!”
“If this ends up in a fucking disaster, I’ll kill you.”

Lisa is an Amazon bestselling author of contemporary and paranormal romance. She is originally from the UK and moved to Australia in 2001. She now lives in Perth, Western Australia with her husband, three children, and Weimaraner, Tilly, who often makes appearances on Lisa’s social media.

Lisa’s first publication was a moving poem about the rain, followed by a suspenseful story about shoes. Following these successes at nine years old there was a long gap in her writing career, until she published her first book in 2013.

In the past, Lisa worked as an English teacher in France, as an advertising copywriter in England, and ran her own business in Australia. Now she spends her days with imaginary rock stars.

She lived in Europe as a child and also travelled when she left university. This has given Lisa stories which would sound far-fetched if she wrote them down, and maybe one day she will. These days, Lisa is happy in her writing cave, under Tilly’s supervision.