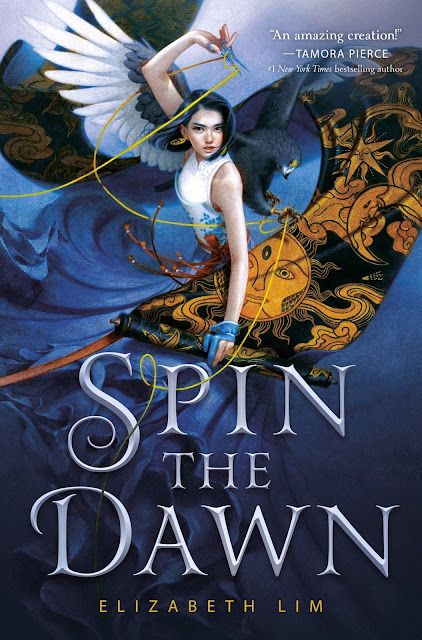 Project Runway meets Mulan in this sweeping YA fantasy about a young girl who poses as a boy to compete for the role of imperial tailor and embarks on an impossible journey to sew three magic dresses, from the sun, the moon, and the stars.Maia Tamarin dreams of becoming the greatest tailor in the land, but as a girl, the best she can hope for is to marry well. When a royal messenger summons her ailing father, once a tailor of renown, to court, Maia poses as a boy and takes his place. She knows her life is forfeit if her secret is discovered, but she'll take that risk to achieve her dream and save her family from ruin. There's just one catch: Maia is one of twelve tailors vying for the job.Backstabbing and lies run rampant as the tailors compete in challenges to prove their artistry and skill. Maia's task is further complicated when she draws the attention of the court magician, Edan, whose piercing eyes seem to see straight through her disguise.And nothing could have prepared her for the final challenge: to sew three magic gowns for the emperor's reluctant bride-to-be, from the laughter of the sun, the tears of the moon, and the blood of stars. With this impossible task before her, she embarks on a journey to the far reaches of the kingdom, seeking the sun, the moon, and the stars, and finding more than she ever could have imagined. 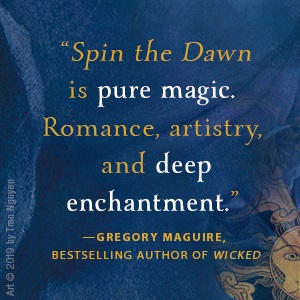 Okay, so if I'm being honest the pitch for this book did not catch my attention. But as I saw some of the early reviews start to come in, I became increasingly more intrigued. SPIN THE DAWN is said to be a mix of Project Runway meets Mulan. I feel like that only describes the first half of the book. I would describe the second half as more of a mashup between Aladdin and an adventure/quest (think Percy Jackson) mixed with something I can't quite place my finger on.Maia is the daughter of a renowned Tailor and when tragedy strikes their family (from multiple fronts), Maia is left to carry the burden of keeping their shop running. But no one can know. Women aren't allowed to become tailors. Between her father's illness, her brothers' absences, and the war causing business to dwindle, her family is struggling to survive. Now that the war has ended, the Emperor is searching for the perfect tailor to make his new fiance's wedding dress and become the Imperial Tailor. When the Emperor's people come knocking, there's only one thing to do.... impersonate her brother and try to win a spot as the Imperial Tailor.I loved this book from the minute I started reading it. Lim did a fantastic job of immediately grabbing my attention and keeping me interested throughout the whole story. I found it refreshing to have a story told through a single point of view. The author dreamed up many intriguing characters, but just like Maia caught the court magician's eye, he caught mine! The Enchanter is sassy, swoon worthy, and cloaked in secrecy. If you love a fantasy full of adventure, betrayal, mystery, mythology, and a slow burn romance, then look no further! This may be Lim's debut novel, but it didn't feel like it. I cannot wait to see what the future holds for this story and anything else she writes. 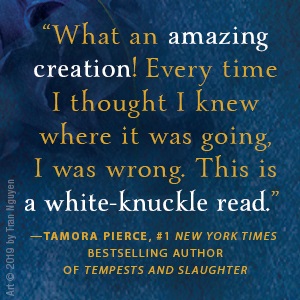 Elizabeth Lim grew up on a hearty staple of fairy tales, myths, and songs. Her passion for storytelling began around age 10, when she started writing fanfics for Sailor Moon, Sweet Valley, and Star Wars, and posted them online to discover, "Wow, people actually read my stuff. And that's kinda cool!" But after one of her teachers told her she had "too much voice" in her essays, Elizabeth took a break from creative writing to focus on not flunking English.


Over the years, Elizabeth became a film and video game composer, and even went so far as to get a doctorate in music composition. But she always missed writing, and she turned to penning stories when she needed a breather from grad school. One day, she decided to write and finish a novel -- for kicks, at first, then things became serious -- and she hasn't looked back since.


Elizabeth loves classic film scores, books with a good romance, food (she currently has a soft spot for arepas and Ethiopian food), the color turquoise, overcast skies, English muffins, cycling, and baking. She grew up in Northern California, with a brief stint in Tokyo, Japan, but now lives in New York City with her husband and their daughter.
​
Elizabeth graduated from Harvard College with a degree in music and a secondary in East Asian Studies, and completed her graduate degrees at The Juilliard School.
​
She is represented by Gina Maccoby of the Gina Maccoby Literary Agency.