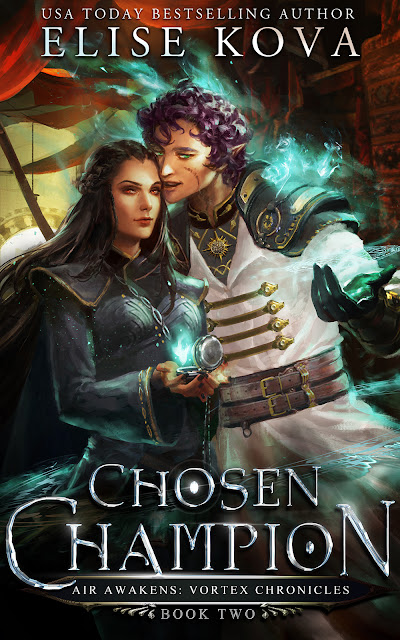 A princess on the run with enemies on all sides…
Vi Solaris is on the eve of getting everything she’s ever wanted—her family, her home, her throne—and to save the world she’s going to have to give it all up.
The Empire sees her as their Crown Princess, returning at long last. But Vi only sees visions of fate guiding her to the world’s gruesome end. Across the sea is a man who holds the keys to deciphering her premonitions and thwarting the ancient evil ravaging their world. But to get to him, Vi will have to contend with enemies of the crown, romance she didn’t expect, sorcerer pirates, and a betrayal she never saw coming.
She will learn the hard way that some evils never die… They only bide their time…
Return to Solaris in the second book of Air Awakens: Vortex Chronicles, a young adult epic fantasy filled with even more magic, adventure, and romance. Get ready for twists you never saw coming that will keep you up all night reading!

| AMAZON |
Only available through Amazon. But if you are a nook or kobo reader, simply purchase through Amazon, then email proof of purchase to Elise.Kova.Author@gmail.com, and a personalized "read anywhere" link will be sent!

The giveaway is for a signed hardcover of book one! A desperate princess, a magical traveler, and a watch that binds them together with the fate of a dying world.

Vi Solaris is the heir to an Empire she’s barely seen. Her parents sacrificed a life with her to quell a rebellion and secure peace with a political alliance. Now, three years past when her wardship should’ve ended, Vi will do anything to be reunited with her family.

The Empire is faltering beneath the burden of political infighting and a deadly plague. Yet, Vi can’t help but wonder if her inability to control her magic is the true reason her parents haven’t brought her home. Suspicion becomes reality when she unleashes powers she’s not supposed to have.

As Vi fights to get her magic under control, a mysterious stranger appears from across the world. He holds the keys to unlocking her full potential, but the knowledge has an unspeakable price — some truths, once seen, cannot be ignored.

All eyes are on her and Vi must make the hardest choice of her life: Play by the rules and claim her throne. Or, break them and save the world.