Cover Reveal: THE TRUTH ABOUT US by Aly Martinez

The conclusion to the heart-stopping Truth Duet by Aly Martinez is coming Sept 13th...

Today we are sharing the cover reveal for the second book in The Truth Duet by Aly Martinez. The Truth About Us is releasing on September 13th and it is available for pre-order now! The first book in the duet, The Truth About Lies, is available to read for FREE as part of KindleUnlimited!

PRE-ORDER THE TRUTH ABOUT US NOW: Truth: Penn Walker entered my life like a summer storm—dark, ominous, and filled with thunder.

After witnessing my husband’s murder, I didn’t have much of a heart left to offer a man.

But Penn took it all.

Even the dirty and twisted pieces that I wish never existed.

Lie: I didn’t need him to save me.

Lie: I knew exactly who he was.

Lie: Losing him wouldn’t destroy me.

But that’s the thing about lies—you never know who to believe. 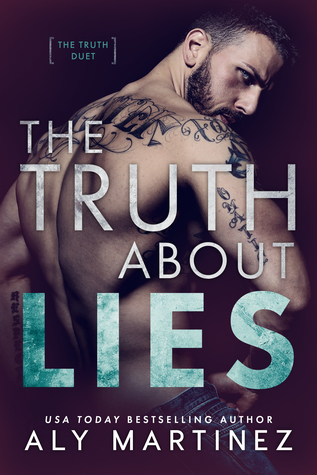 Truth: From over a thousand miles away, I watched on the screen of my phone as two men murdered my wife. And I was helpless to save her.Consumed by hate and rage, I spent four years running from my memories. Until a shattered woman gave me a reason to stop.Cora lived in a nightmare, but through sheer force of will, she’d turned it into something beautiful. She had a smile that could pierce the darkest soul. And with one glance, she shredded mine. Lie: I was only there for a fresh start.Lie: I had no idea what I was getting myself into.Lie: There was nothing I could do to save her, either.But that’s the thing about lies—you never know who to believe. THE TRUTH ABOUT LIES (The Truth Duet, #1)

Be sure to follow Aly's newsletter for news about the duet.

Originally from Savannah, Georgia, USA Today bestselling author Aly Martinez now lives in South Carolina with her four young children. Never one to take herself too seriously, she enjoys cheap wine, mystery leggings, and baked feta. It should be known, however, that she hates pizza and ice cream, almost as much as writing her bio in the third person. She passes what little free time she has reading anything and everything she can get her hands on, preferably with a super-sized tumbler of wine by her side.