Cover Reveal: A LITTLE TOO LATE by Staci Hart 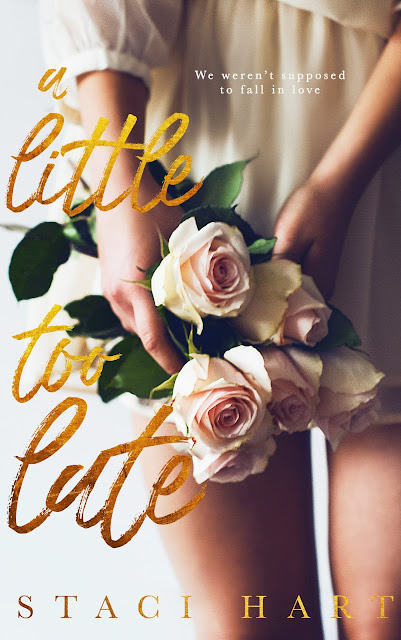 A Little Too Late, an all-new romantic standalone from Staci Hart is coming October 24th!

Title: A Little Too Late by Staci Hart

I wasn't supposed to fall in love with the nanny.
When my wife left, she took the illusion of happiness with her, and I've been caught in a free fall ever since. For nine long months, I've been fighting to figure out how to be a single dad, how to be alone.
For nine long months, I've been failing.
When Hannah walked through the door, I took my first breath since I'd found myself on my own. She slipped into our lives effortlessly, showing me what I've been missing all these years. Because Hannah made me smile when I thought I'd packed the notion of happiness away with my wedding album.
She was only supposed to be the nanny, but she's so much more.
The day my wife left should have been the worst day of my life, but it wasn't. It was when Hannah walked away, taking my heart with her.

Add to you Goodreads TBR

Amazon will be live October 24th, sign up here to get an email reminder:
http://stacihartnovels.com/get-the-newsletter/

Staci has been a lot of things up to this point in her life -- a graphic designer, an entrepreneur, a seamstress, a clothing and handbag designer, a waitress. Can't forget that. She's also been a mom, with three little girls who are sure to grow up to break a number of hearts. She's been a wife, though she's certainly not the cleanest, or the best cook. She's also super, duper fun at a party, especially if she's been drinking whiskey. From roots in Houston to a seven year stint in Southern California, Staci and her family ended up settling somewhere in between and equally north, in Denver. They are new enough that snow is still magical. When she's not writing, she's reading, sleeping, gaming, or designing graphics.