Cover Reveal: BENEATH THESE SHADOWS by Meghan March 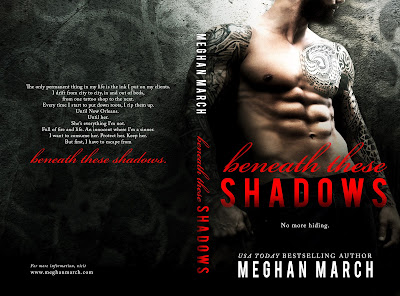 The only permanent thing in my life is the ink I put on my clients.
I drift from city to city, in and out of beds, from one tattoo shop to the next.
Every time I start to put down roots, I rip them up.
Until New Orleans.
Until her.
She’s everything I’m not.
Full of fire and life. An innocent where I’m a sinner.
I want to consume her. Protect her. Keep her.
But first, I have to escape from beneath these shadows.

Beneath These Shadows is a STANDALONE romance set in the world of the Beneath series. You DO NOT have to read any other books in the series to enjoy it.

BENEATH THIS MASK:
He loves me, and he doesn’t even know my real name. The limelight that follows him could expose everything I’m hiding. But even knowing the risks, I can’t force myself to stay away. I’m going to break his heart, but mine will shatter right along with it. Will we lose it all when I reveal what’s beneath this mask? Beneath This Mask is a stand alone contemporary romance and the first book in the Beneath series. If you'd like to extend your stay in NOLA and the sexy world of the Beneath series, check out Beneath This Ink, Beneath These Chains, and Beneath These Scars.

BENEATH THIS INK:
I’ve always known she was too good for me, but that never stopped me from wanting her.
And then I finally had her for one night.
A night I don’t remember.
I figured I’d blown my shot.
But now she’s walked back into my life, and this time, I have the upper hand. I want my second chance.
Will she be able to see the man beneath this ink?

BENEATH THESE CHAINS:
I was raised on the streets, so I know things are rarely as simple as they appear—especially this rich girl showing up at my pawnshop demanding a job. She’s the most tempting thing I’ve ever seen, and I’ll be damned if I can make her leave. Shit just got complicated … but when it comes to her, I want complicated.  We’re both fighting our own demons, and our only chance at a future is to let go of the past. But will we be strong enough to break free from beneath these chains? 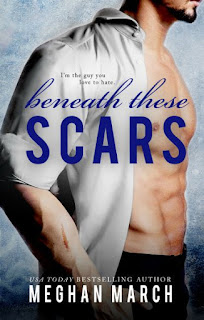 BENEATH THESE SCARS:
I’m the guy you love to hate.
In every story in my life, I seem to end up playing the villain—and I’ve got the scars to prove it.
That role works fine for me, because I’m sure as hell not anyone’s hero.
I run my life and my empire with an iron fist—until she knocks my tightly controlled world off its axis.
She’s nobody’s damsel in distress, but I can’t help but want to save her anyway.
I guess we’re about to find out if there’s a hero buried … beneath these scars. 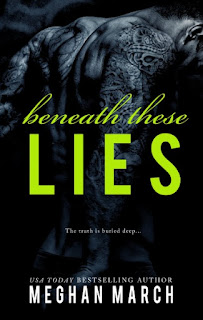 BENEATH THESE LIES:
Look, but don’t touch…she might as well wear a neon sign that says it. It just makes me want her more.
She might be above me in every way, but I still want her under me.
I’ve got no business touching her rich-girl skin, but that won’t stop me from stealing a taste. Because rules were meant to be broken—especially when the prize is so fine.
In a world where nothing is as it seems, what's buried beneath these lies?

Meghan March has been known to wear camo face paint and tromp around in woods wearing mud-covered boots, all while sporting a perfect manicure. She's also impulsive, easily entertained, and absolutely unapologetic about the fact that she loves to read and write smut. Her past lives include slinging auto parts, selling lingerie, making custom jewelry, and practicing corporate law. Writing books about dirty talking alpha males and the strong, sassy women who bring them to their knees is by far the most fabulous job she's ever had. She loves hearing from her readers at meghanmarchbooks@gmail.com.