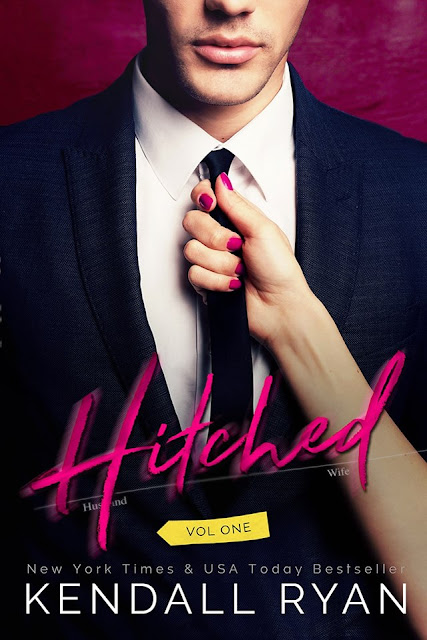 Marry the girl I’ve had a crush on my whole life? Check.

Produce an heir… Wait, what?

I have ninety days to knock up my brand-new fake wife. There’s only one problem—she hates my guts.

And in the fine print of the contract? The requirement that we produce an heir.

She can’t stand to be in the same room with me. Says she’ll never be in my bed. But I’ve never backed down from a challenge and I’m not about to start now.

Mark my words—I’ll have her begging for me, and it won’t take ninety days.

A hot and hilarious romp not to miss!
Say "I DO" to your next book boyfriend husband. (He totally wants to put a bun in her oven.)
On the heels of her smash hit and New York Times bestselling SCREWED series, Kendall Ryan brings you HITCHED, a romantic comedy that delivers heart and heat. A NYC playboy turned business mogul has ninety days to win over the woman he's always desired in order to save his father's company. One tiny problem: She hates his guts. 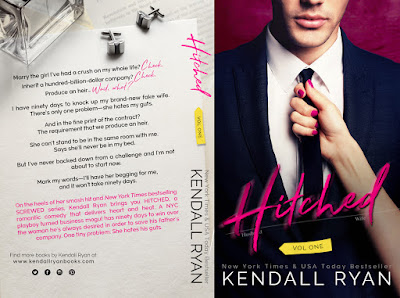 Rating: 5/5 stars
Genre: Romantic Comedy
Series: Volume 1 of 3 in the Imperfect Love Mini-Series
Okay, I’m not going to lie. I totally signed up to review this book because of the gorgeous cover! I mean, who wouldn't have. The vibrant color just grabs your attention immediately. Am I the only one who sits there looking at a book cover for an author I’ve never read before and say to myself “the book has to be good. The cover is stunning?” No? Okay phew! I thought it was just me. So we’ve established that I am a sucker for a pretty book. Once I saw this cover I figured I should probably read what it was about. After reading the blurb for HITCHED I was already hooked and have been anxiously waiting to start this story. Arranged marriage? Cocky stud? Strong, independent woman? Yes please!

"I want to save Tate & Cane Enterprises. This company is our birthright, our fathers' legacy – and its employees are our responsibility"

When HITCHED landed on my kindle I quickly finished up my current read so I could dive right in. Noah and Olivia have known each other practically their entire lives. Their fathers are the founders and co-CEOs of Tate & Cane Enterprises. With one father gone and the other terminally ill, the fate of the company rests in their hands. But under one condition. They have to get married. They grew up together, had a brief period of attraction back in high school but it never evolved into anything. Noah is a sexy businessman who has had the ability to sweet talk his way out of and into almost anything he wants. Except her. Olivia is a driven, strong willed, and has worked hard to get where she is. Can they figure out how to coexist in order to save their company? I sure hope so!

“As business partners, Olivia and I blur gender stereotypes. I’m the ‘face,’ the charismatic people-pleaser, while she’s the get-shit-done powerhouse. Playing to our strengths lets us divide and conquer.”

I read HITCHED in two days (in the middle of packing and moving!). This story was completely addictive. Kennedy Ryan even threw some great twists in there that threw me for a loop. Since this was Volume 1 in a 3-part mini-series, I just KNEW we were leading up to a cliffhanger. Boy did it ever! Thank goodness each installment is only releasing 2 weeks apart. I’ll have plenty to keep me busy for some much needed breaks while unpacking. For my first book by Kennedy Ryan, I am impressed. I will definitively be looking in to more of her work. 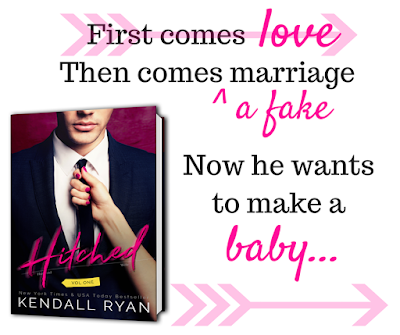 "That’s the whole point of doing this trial period—to see how well we can play ball together before committing to a team-up. I’m doing my best to become friends with you, so . . .”

He tilts his head with a half smile. “Just friends? I’ve got my sights set a little higher.”

Gee, I never would have guessed, what with his constant attempts to steer the conversation toward sex.

I quirk one eyebrow in skepticism. “Friendship is all we need to pull this thing off. And we’re pretty much starting from square one . . . I would call us acquaintances, at best. Don’t you think you’re being a little overambitious?”

I roll my eyes. “Wow. Your arrogance truly has no limits.”

“If I can put my money where my mouth is . . .” His lustful smirk makes it clear exactly where he’d like to put his mouth. “Then it’s not arrogance. Just confidence.”

“What makes you think I would want more with you, anyway? You aren’t exactly my type.”

I expect him to just give me a knowing look, or maybe toss back some mild innuendo. What I absolutely did not expect was, “Because I have a nine-inch cock.”

I almost choke on my martini for a third time. I splutter, “Is that number supposed to impress me?”

I give him a skeptical look. “You want to show me your dick?”

“If it’ll help convince you.” He drains the last drops of his Scotch and stands up. “Come on, let’s go.”

I stare after him as he walks away.

Is he serious? He’s just going to whip it out? I look around to see if anyone is watching me, then I get up and follow him to the bar’s back hallway, near the restrooms, unable to comprehend why the hell I’m humoring him. This is ridiculous.

Once we’re safely in a private corner, Noah undoes his belt, opens his fly . . . and pulls out a fucking fire hose.

Holy mother of God. My hands fly to my mouth. I want to gasp in shock, but there’s no way I’m giving him the upper hand.

He was right. His cock is nothing short of massive, and it’s not even fully erect right now. Nine inches may actually be a conservative estimate of what it might look like hard. He must destroy men’s egos every time he walks into a locker room. And I don’t even want to think about what he destroys with women . . .

“Meh. I’ve seen bigger,” I force out, fighting to maintain my composure.

“Well, th-that monster is not coming anywhere near my uterus. No, thank you. I prefer to keep my organs intact.”

Noah’s grin widens. “I doubt that, but just to be on the safe side, I’ll ease it in nice and slow. Piece of cake. Plus, you’ve got good health insurance, right?”

“That is not funny, Noah. Now, put that thing away or I’ll remove it.”

I try to sound stern, but my shaking voice and bright red cheeks surely give me away. Why the hell can’t I stop staring?

He chuckles—yeah, the jerk can definitely see right through me—but he obliges, tucking the beast back into its lair.