Heavy footsteps roused me from my stupor. I don’t know how long exactly I’d been sitting in the bathtub, staring off at nothing, pondering the catastrophe my life had become. Couldn’t have been too long since sunlight still lit the room.
The footsteps came closer and closer. And then they entered the room. Oh, shit. I froze, not even daring to breathe. There was a loud yawn, followed by the cracking of joints. Then a large hand reached in beside the closed shower curtain and turned on the tap. A torrent of ice cold water poured down. It was like a billion itty-bitty knives stabbing at my skin. All of the scratches and raw patches from earlier stung like shit. I gritted my teeth, shoulders hiked up to around my ears as if that would provide any protection.
Yep, I sat there, all huddled up, listening to the man take a leak.
Awesome. Just plain awesome.
Wasn’t like I could jump out and interrupt the man midflow. And say what? I knew this was not a good situation to get caught in.
1. I’d basically broken into this guy’s house.
2. And had then gone on making myself right at home, having a messy emotional breakdown in his bathtub.
Normal, rational people didn’t do this sort of thing. I didn’t even have a criminal record, had never particularly done anything outlandish or interesting until now. This was all Chris’s fault, the bastard. I’d just have to make the best of it and hope this guy had a sense of humor.
Just as the water began to warm, he flushed the john and freezing cold water drenched me anew. I’d been about to open my mouth and announce my presence, but that put an end to that. Needles of icy cold water pelted down on my skin. I fucking froze. Teeth gritted, I suppressed a squeal of pain and rage. 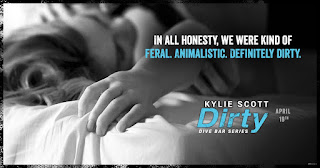 Then the shower curtain flew back.
“Shit!” The man was very tall, very naked, and very surprised. He stumbled back a step, a hand clutching at the bench behind him, eyes furious and wide. “What the hell?”
Good question.
I opened my mouth, closed it. Language skills had apparently abandoned me. In total silence, the man and I stared at each other.
Even with no clothing to take cues from, the dude was clearly the epitome of cool. He looked about my age, or maybe a little older. He had longish red-blond hair, dark blue eyes set in an angular face, a lean but muscular torso covered in tattoos, and a rather large cock. Not that I meant to check him out, it’s just kind of hard to ignore a penis and scrotum when they’re dangling right in front of your face. I tilted my head, trying to get some perspective. Every viewpoint, however, was equally shocking. There was dick as far as the eye could see.
And I should stop ogling him. Right.
“Hi.” With a calm I didn’t even vaguely feel, I reached up and turned off the tap. Much better. His monster penis had momentarily derailed me, but I was back on track now. Time to talk myself out of this mess. “Hey.”
“What the fuck are you doing in my house?” he asked flatly.
“Right. Well . . .” I neatly tucked my dripping-wet shoulder-length blond hair back behind my ears. As if that would help. My winged eyeliner and false lashes were probably halfway down my cheeks. “I, um, I . . .”
“You what?”
“I’m Lydia,” I said, the first thing to come to mind.
No reply. His handsome face, however, took on a distinctly pissy expression. Even his strawberry-blond hair seemed a fiery hue. Fine, so we weren’t swapping names and getting cozy. Fair enough. You wouldn’t believe how hard it was, keeping my eyes on his face. The struggle was real. It might have been due to my not seeing one in so long, but his dick seemed almost hypnotic. The thing had magical powers, I swear. It was so big and mobile, subtly swaying every time he moved. My gaze kept darting down despite my best efforts.
Finally he put me out of my misery, grabbing a towel off a nearby rack and wrapping it around his waist. It made for quite the hot-looking miniskirt. Not just any man could have pulled off such a look.
But back to my explanations.
“Ah, firstly, I’d just like to say sorry about this.” I waved a hand at him and his bathroom and, well everything, really. “For any inconvenience I might have caused here in your bathroom.”
The guy stood tall, looming over me with his hands on hips. Tattoos covered his arms to his wrists. Still, he had a whole lot of sinew on show. Definitely not the kind of man you’d want to mess with. Dude could probably snap me in half in a second. I bet he was a tattoo model, or a biker, or a pirate, or something. Something a lot hot and more than a little scary.
Shit. I really should have chosen another house.
“I don’t normally break into people’s places and hide out in their tub,” I babbled, on the verge of incoherency. “So I’m really sorry. Seriously. So very sorry. But you’ve got a lovely home.”
“That so?”
“Not that, I mean, that’s not why I’m here. I just . . .” Fucking hell, my mind was a disaster. I took a deep breath, letting it out nice and slow, before trying again. “I love the old Arts and Crafts bungalows, don’t you? They have such soul.”
His brows drew tight. “Are you high? What the fuck are you on?”
“Nothing!”
“You haven’t been popping any pills or snorting something?”
“No, I swear.”
“Nothing to drink?”
“I haven’t had anything,” I said, but the suspicion and anger still lined his face. Paired with the stubble on his chin and the shadows beneath his eyes, my unwilling host was one tired, cranky man. Couldn’t really blame him.
“So you’re completely sober,” he said.
“Completely.”
A pause.
“You’re thinking I’m bat-shit crazy now, aren’t you?” I asked, despite the answer sitting plain as day on his pretty face.
“Pretty much, yeah.”
Oh, god. “I’m not. I’m sane.”
“You sure about that?” He looked down the long line of his nose at me, distinctly unimpressed. “Seen a lot of weird shit in my years. Stuff like you wouldn’t believe. But I got to tell you, right now, this . . . you, are taking the cake.” 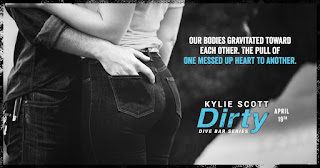 
He turned toward the door. “See you out there.”

Are you ready to get Dirty?
Dirty is Book One in Kylie Scott’s Dive Bar Series.
Meet Vaughn & Lydia on April 19th! 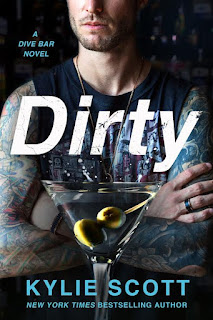 The last thing Vaughan Hewson expects to find when he returns to his childhood home is a broken hearted bride in his shower, let alone the drama and chaos that comes with her.

Lydia Green doesn't know whether to burn down the church or sit and
cry in a corner. Discovering the love of your life is having an affair on your wedding day is bad enough. Finding out it's with his best man is another thing all together. She narrowly escapes tying the knot and meets Vaughan only hours later.

Vaughan is the exact opposite of the picture perfect, respected businessman she thought she'd marry. This former musician-turned-bartender is rough around the edges and unsettled. But she already tried Mr. Right and discovered he's all wrong-maybe it's time to give Mr. Right Now a chance.

After all, what's wrong with getting dirty?

Kylie is represented by Amy Tannenbaum at the Jane Rotrosen Agency, New York.