Ten authors and one grand scheme of mayhem and magic in the depths of New Orleans.

About The Supernatural Chronicles: The New Orleans Collection: Beneath the brow of Bourbon and French architecture, the iris of New Orleans swirls with flecks of worlds and beings unknown to mankind. Come with us as we chronicle their journey—each supernatural race must hunt for an offering in hopes of saving their own. Skinwalkers, Wolves, Vampires, Dragons, Succubi, Witches, Necromancers, Cupids, and Asgardians are all in danger of losing control as an uprising darkness threatens to rip the veil that protects them all from the great beyond. Ten original novellas, following each supernatural race as they fight an elusive enemy, are written by New Adult authors Lila Felix, Kristie Cook, Brenda Pandos, Delphina Henley, Julia Crane, Jamie Magee, Morgan Wylie, Kallie Ross, S.T. Bende, and Rebecca Ethington. Come join them for the hunt and discover hidden treasures inside.

I have a fantastically dark story and creatively inspiring author to share with you! I’m Kallie Ross, and Rebecca Ethington is one of the storytellers I’ve worked with on the Supernatural Chronicles. Rebecca wrote The Noir, the conclusion to all the paranormal races overrunning New Orleans. The ruthless creatures and their ice-cold underworld were like nothing I’d read before, in the best way possible! Rebecca has some explaining to do, and I thought it would be fun to give you a glimpse into The Noir while I get my answers.

Rebecca, I’d love to know how you came up with the idea to make Hell colder than Antarctica?

I always like to write beyond what people perceive as the norm. And when I thought about what I know about Hell, heat was the number one thing. However, for me, cold is almost worse. When you are cold, it’s hard to move and hard to think. You can keep adding layers, but the chances of you getting warm again is still slim. Then when I began to build the imagery of the world I was creating, it was dark and damp - and the cold just lent itself to that even more. However, in the presence of the devil, the world is warm. And that change made the world so ominous to me. I love it, and I hope the readers do as well.

Your Noir are beautiful, cold-hearted immortals. I can’t help but wonder why you chose to give them sharp teeth?!? (Honestly, I pictured teeth like the vamps in Supernatural!)

One of the other staples of the Hell Mythos are the hounds, but the idea of large dogs roaming and controlling the souls seemed odd to me. When you look at the cover of The Noir it is graced by a beautiful woman, she looks calm and demure, but her eyes are harsh. That is Delia in my mind, and it was that harshness that connected that beautiful girl with those demon hounds and bound them as one. In my mind it’s more than just fangs too, it’s sharp points on every tooth, blood red gums, and dark eyes. I love the imagery of that darkness.

The Noir are solitary creatures, but your main character, Delia, is forced to work with others. Can you give us any clues about how Delia’s relationships with Adrian and Hayden will play out? I’m not very optimistic.

Without giving anything away, so much of how the Noir process the world and their surroundings comes from the types of sins they devour from the souls of the damned. The three of them have had very different jobs, and even different tastes, meaning that what comes next is going to be, shall we say, eruptive. Especially considering the circumstances they find themselves in at the end of The supernatural Chronicles.

I write about an antithetical race of heavenly immortals to your Noir. How do you think one of your hellish beasts would react during an encounter with one of my angelic archers?

I am not sure to be perfectly honest. We have mutating, soul eating, hell hounds - and angelic flying archers. This might actually be a battle that needs to happen, Kallie. We will be in touch.

Do you think there’s an existing line that Delia won’t cross to get her hands on the Devil’s sword?

I don’t think so, Delia is an exceptionally loyal Noir. She sees what her master needs and will not cease in her quest to give that to him. That is shown very much in the choice she makes at the end of The Supernatural Chronicles: New Orleans. That be said, if you pay attention, some very deep things occur to our girl, and some things may be occurring in that demonic mind of hers that might lead her to second guess that loyalty.

I know it’s a stretch, but is there anything you can reveal about where the Noir will go next, or if you plan to write more outside of Dynamis’ Supernatural Chronicles?

I am not sure to be honest. Part of the joy of this project has been working with so many other, amazing authors to develop this story as a whole. A lot of that depends on which city we go to next, and where all of our characters take us.
So, make sure to pick up your copy of the box set and help us decide where we are going, and watch this story unfold and deepen as we continue on. 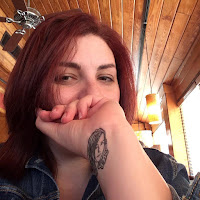 Rebecca Ethington has been telling stories since she was small. First, with writing crude scripts, and then on stage with years of theatrical performances. The Imdalind Series is her first stint into the world of literary writing. Rebecca is a mother to two, and wife to her best friend of 14 years. She was born and raised in the mountains of Salt Lake City, and hasn’t found the desire to leave yet. Her days are spent writing, running, and enjoying life with her amazing family.

Don’t miss each of the individual Supernatural Chronicles!