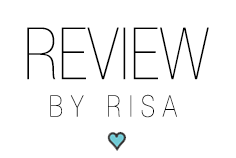 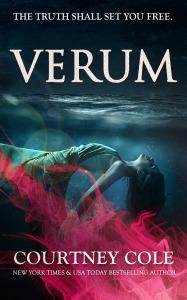 THE TRUTH SHALL SET YOU FREE.
My name is Calla Price and I’m drowning.
My new world is a dark, dark ocean and I’m being pulled under by secrets.
Can I trust anyone? I don’t know anymore.
The lies are spirals. They twist and turn, binding me with their thorns and serpentine tongues. And just when I think I have it figured out, everything is pulled out from under me.
I’m entangled in the darkness.
But the truth will set me free.
It’s just ahead of me, so close I can touch it. But even though it shines and glimmers, it has glistening fangs and I know it will shred me.
Are you scared?
I am. 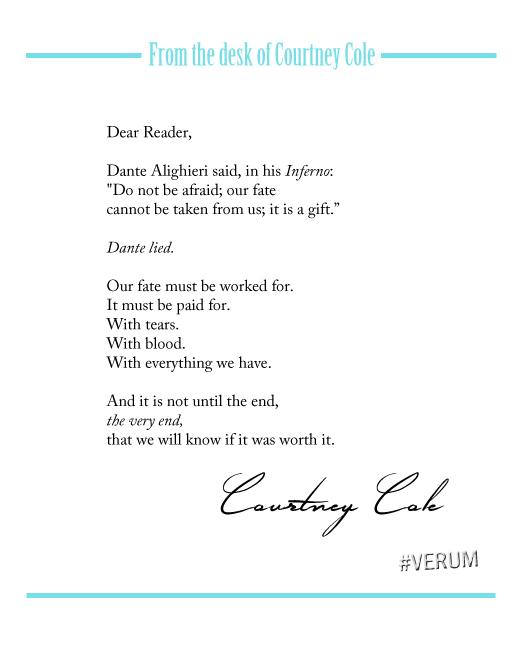 Genre: New Adult-With a YA feel


WOW!.....This is a challenging review…I honestly don’t even know where to begin with this story. I don’t feel very articulate at the moment….and once I reached the end I was more frustrated than anything else…which isn’t a bad thing, it’s just something I was so wrapped up in that the end almost made my head explode…

Verum picks up where Nocte left us, but as far as my mind is concerned it was like picking up a whole new series! Verum was a story within a story and though I absolutely loved it, my confusion kind of clouded my judgment. There were things that we’re hinted at too subtly, and it’s kind of left up to the reader to put the pieces together…which can be fun, but if the details aren’t fresh in your mind you may be left scratching your head.


For example the connection between Dare and Calla’s family, felt indirectly explained. It was like “Calla you are in danger” then “Oh Calla, come across the country with me to Whitley where you will be safe.” Then “Ohh hey reader in case you didn’t put it together Calla’s Uncle is also Dare’s step-father”…….Whatt?!?- it felt like no explanation was given, which made getting into the story hard for me as it didn’t really feel like an organic transition.


We know there are secrets Calla is trying to uncover. With her mental break regarding the death of family, she is fragile but determined. She’s desperate for answers as was I, and I wanted to push her to keep on going, dig deeper be fearless and GO! It was infuriating to see people coddle her mind, and urge her forward at a snail’s pace. I adjusted to Calla being at Whitley, the strange hooded boy lurking about and her urge to push and keep Dare at arm’s length out of…fear? It’s an interesting thing to be inside a mind that’s unraveling. It was beautifully written I can’t deny that.


Just when you think you have put the pieces together and figured it out, the next page blows all your assumptions away. I really and honestly have no idea what is going on here. I had my theories but I really just can’t tell which end is up…and I’m starting to think that’s exactly how Ms. Cole wants it. I mean was it a coma dream? Who is really dead?? I just….

I would LOVE to go over all these theories with you, but I really really feel with this series it’s important to form your own opinions and feel everything for the first time with unbiased eyes. Spoilers would only confuse you more….


This whole story is a mystery you are dying to uncover and figure out, it really does suck you in and urge you to keep going, and just when you’re on the precipice you get yanked back into the darkness.


Are the voices Calla hears real? What is UP with Sabine? What is UP with all these strange things Calla has been seeing and experiencing…and as I said just when you think you have it all figured out and have your “OOOhhhh” moment another page blows that theory away and you are left with a nerve wracking cliffhanger…


I’m very concerned right now. I HAVE to know what’s going on….a complex web has been spun here and I just HAVE to figure out what is going on. I LOVED this book, I am in love with this series and all the intensity and desperation it evokes when I’m reading it…and how thought provoking it is even when I’m not reading. Major hangover here.


Now just to explain my 3.5 rating, it’s only because of the rocky start. I LOVED this book and I would totally recommend it to fans of the mystery genre, but the flow of information was just a little rough for me in the beginning. I found myself TOO confused and I wanted to focus on THOSE specifics rather than getting into the rest of the story, which had clearly moved on. Once I let it go and continued on, it became much more enjoyable and put together for me.

Check out Risa's review on the first book, NOCTE!
Posted by Unknown at 12:00 PM