Book Review: All Broke Down by Cora Carmack

ALL BROKE DOWN
By Cora Carmack 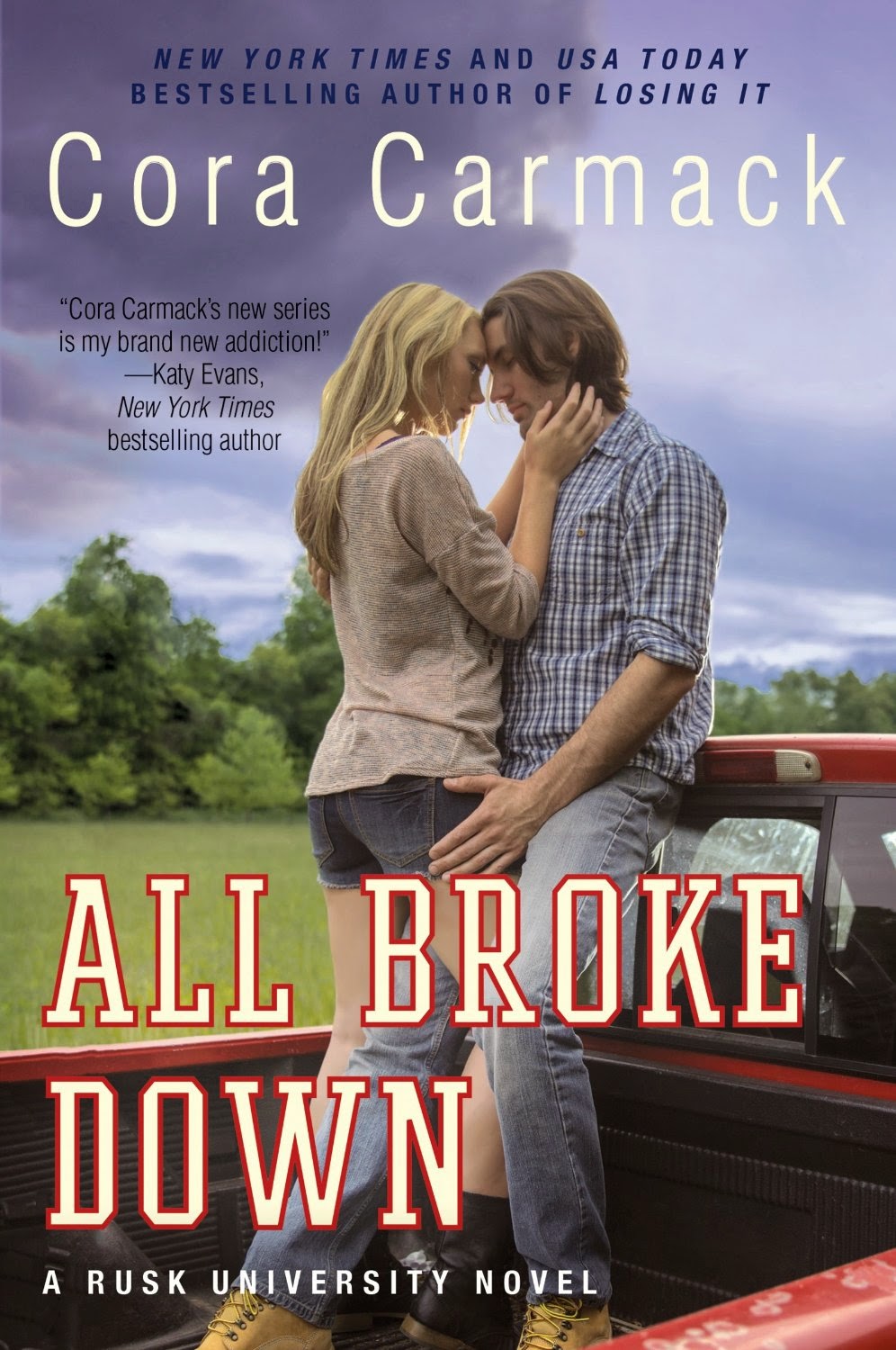 About All Broke Down
Dylan fights for lost causes. Probably because she used to be one.Environmental issues, civil rights, corrupt corporations, and politicians you name it, she's probably been involved in a protest. When her latest cause lands her in jail overnight, she meets Silas Moore. He's in for a different kind of fighting. And though he's arrogant and infuriating, she can't help being fascinated with him. Yet another lost cause.Football and trouble are the only things that have ever come naturally to Silas. And it's trouble that lands him in a cell next to do-gooder Dylan. He's met girls like her before fixers, he calls them, desperate to heal the damage and make him into their ideal boyfriend. But he doesn't think he's broken, and he definitely doesn't need a girlfriend trying to change him. Until, that is, his anger issues and rash decisions threaten the only thing he really cares about: his spot on the Rusk University football team. Dylan might just be the perfect girl to help.Because Silas Moore needs some fixing after all.


After reading the first book in this series, All Lined Up (which I loved), Silas Moore was a secondary character we only got a glimpse of.

Not only is he amazing at the game of football, he also has an amazing track record of starting fights, bets, and never getting a hold of that smart mouth of his. You can definitely tell he has a huge wall up and puts on a front that no one knows about. He wants to be known as the strong one. The one who has no cares or worries about life itself. But little do we know, Silas Moore is so much more than a hot body and a smart ass mouth... and boy do we love getting to know Silas!!!

In All Broke Down, we got to know the real Silas Moore. His worries, fears, strengths, weaknesses... really, the title of the book says it all. Cora Carmack definitely broke Silas down. It took a while to really get inside his head because he's has such a strong willed personality, but as the book progressed, the walls came down. It wasn't just because he willed himself to become a better person, but of who he wanted to be a better person for. And with that, comes Dylan Brenner.

Dylan Brenner isn't your typical beautiful, long blonde hair, skinny college girl. She's got the grades, and the power to do anything she sets her mind to. Not to mention the power of her last name, too... Dylan wants to make the world a better place. Not only does that include saving homeless shelters, but maybe helping a certain football player we all know.

After Dylan and Silas meet, we can see the automatic connection they both have. Even though they seemed like two completely different people to the public eye, it was beautiful how well they both complimented one another. Both had different strengths and weaknesses, and they replied on each other to become the better version of themselves.

This book exceeded my expectations. The character growth and how things unravelled to the end, was fantastic. I loved how it kept me on my toes, and made me want to keep reading until I was finished! The chemistry between the two narrators is freaking HOT. Seriously. You'll find yourself fanning your own face because because you can't take how hot it is. Those scenes that Cora wrote.... good lord. I wish I could just type them out for you. But what fun would that be for you? I'll just leave you with a few things that will get your imagination running wild...

"I promise not to get you dirty. Unless you ask real nice"

"Dear world... In case you missed it, Silas Moore is jaw-dropping, mind-blowing, word-fumbling gorgeous. And he made me a sandwich. I think that means I'm winning. At everything."

"She may not be mine, but somewhere along the way, I ended up hers."


Okay. Time to continue with the review lol....

Silas alone demanded my attention, for obvious reasons - but I loved seeing things through his eyes. I also really loved Dylan because she didn't back down, even when things got tough. She knows what she wants, and isn't afraid to go through difficult obstacles to accomplish them. The pair couldn't have been a better match.

So before I make this review even longer... because I can...  I'll just cut to the chase!
I would DEFINITELY recommend this book to everyone! Well... more so the 17+ crowd. This book gets really descriptive, and the scenes are too hot for some of the younger audience. Even if you aren't a huge fan of football, the Rusk series will change your mind.