Review: AFTER WE COLLIDED by Anna Todd 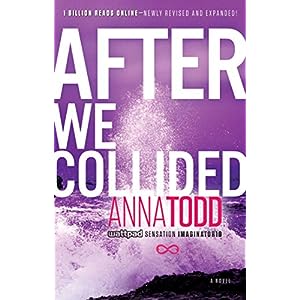 Synopsis:
Book Two of the After series—now newly revised and expanded, Anna Todd’s After fanfiction racked up 1 billion reads online and captivated readers across the globe. Experience the Internet’s most talked-about book for yourself!
Tessa has everything to lose. Hardin has nothing to lose…except her. AFTER WE COLLIDED…Life will never be the same. #HESSA
After a tumultuous beginning to their relationship, Tessa and Hardin were on the path to making things work. Tessa knew Hardin could be cruel, but when a bombshell revelation is dropped about the origins of their relationship—and Hardin’s mysterious past—Tessa is beside herself.
Hardin will always be…Hardin. But is he really the deep, thoughtful guy Tessa fell madly in love with despite his angry exterior—or has he been a stranger all along? She wishes she could walk away. It’s just not that easy. Not with the memory of passionate nights spent in his arms. His electric touch. His hungry kisses.
Still, Tessa’s not sure she can endure one more broken promise. She put so much on hold for Hardin—school, friends, her mom, a relationship with a guy who really loved her, and now possibly even a promising new career. She needs to move forward with her life.
Hardin knows he made a mistake, possibly the biggest one of his life. He’s not going down without a fight. But can he change? Will he change…for love?

REVIEW BY URSULA U.

5 very angsty stars
I’m just going to assume that you all have read AFTER before reading this review ;)
I would be lying if I said that I didn’t absolutely hate Hardin at the end of After, I was gutted and angry and I just didn’t see how Anna would ever manage to come back and engage us again in the story after that ultimate betrayal, I felt like I needed a support group after that ending.

You can read my review for After Here
After We Collided is told from both Tessa’s and Hardin’s point of view and it has never been so important to have both POVs in a story as it is in this book!
We find Hardin and Tessa exactly were we left off in After… I started reading already convinced there was nothing Hardin could say or do that would make me forgive him for what he did, and I was more than ready to scream at Tessa if she dared take him back. Little did I know later I would be screaming at Tessa but for completely different reasons.
I’m sure I mentioned this in my review for After but I shall say it again, Anna is a genius!
Hardin’s POV becomes crucial because you get to see what’s going on inside his head and the devastating pain he feels, and when I say crucial I mean it! We come from hating Hardin at the end of After and then we find out even more horrible stuff he has done and at that point I felt I couldn’t go any further.

His pain though and self-loathing kept me going.
He is suffering a great deal and even after everything that happened there was no doubt in my heart that he loved Tessa, even as complicated and toxic as the love between them seems to be at times. He has had it really tough and losing Tessa may be more than he can handle.

In After We Collided you see a new side of Hardin, one that really wants to try to be a better person, I think you get a real good glimpse at how great of a guy he can really be if he can overcome his demons.
One thing is for sure though he is not giving up on Tessa

But is wanting to change and be better enough though? Enough to make someone forget the bad times?
Sometimes a relationship is so damaged that not even the most profound love is  enough.
Tessa was at times beyond frustrating, UGH! I felt like slapping some sense into her (I may have screamed into my Goodreads a couple of times "Cut the man some slack for the love of Christ!")
I don't want to give to much away but like seriously Tessa, either give the guy break or move on!

I hope you guys are not tired of the roller coaster of feels though because it doesnt get any easier, they still fight and make up more times than I can actually remember (confession time: I'm here for it!), they have so much to work on as far as trusting each other goes and not just for Tessa but for Hardin too, but there is something Landon tells Tessa that stuck with me...
"Just because he can't love you the way you want him to doesn't mean he doesn't love you with everything he has."
Ultimately it all boils down to that. Is their love enough to forgive each other? To trust each other? To accept each others' flaws and mistakes?
In After We Collided Anna doesn't disappoint though, their relationship is HOT even when rocky, and addictive. It's been a long time since I've read books that have kept me up until almost sunrise because I just couldn't put it down.
This book didn't fail to make me feel, and that's what makes me love Anna's work so much, I truly feel despair, anger, frustration, joy with each character, because they become that real in her writing.

And if you thought for a second that she would cut us break with the ending, well think again because I was left picking up my jaw from the ground when I reached the last line.
Now I'm desperately awaiting the arrival of my copy of After We Fell (the struggle is real!)

This series is all consuming 100% fantastic angst and one my favorites this year.

Thanks to Gallery Books and Simon and Schuster for providing me with this review copy.

You can learn more about Ursula HERE.