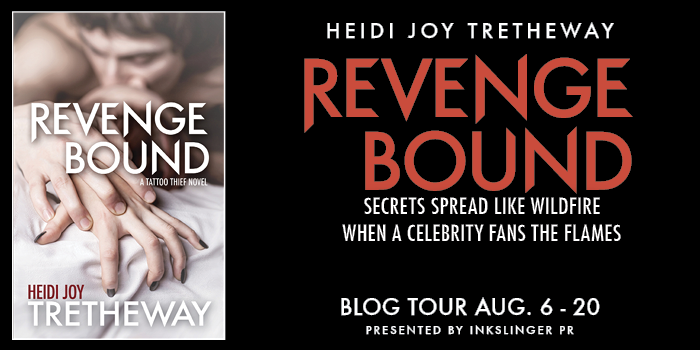 Today we're having the release day launch of Heidi Joy Tretheway's Revenge Bound Be sure to read all the way to the bottom for the fun details on this book and to enter Heidi's amazing giveaway!!

About Revenge Bound On the Internet, secrets never die…


Violet can’t imagine anything worse than having her very private, very naked photos strewn across the Internet.


With her name, address, and phone number attached.


And her boss finds out. And a stalker finds her.


Violet’s refuge is a rock star known for going through groupies faster than guitar picks. Letting Jayce get close enough to protect her exposes her secrets—and her heart—to a man whose celebrity could ruin her.


That’s because being a nobody is the one thing that keeps Violet’s photos from making headlines. And it’s the reason she can never fall for a rock star.


Secrets spread like wildfire when a celebrity fans the flames.


REVENGE BOUND is a full-length, standalone novel, and a companion to the Tattoo Thief books. It contains steamy scenes and strong language intended for mature readers.
Kindle 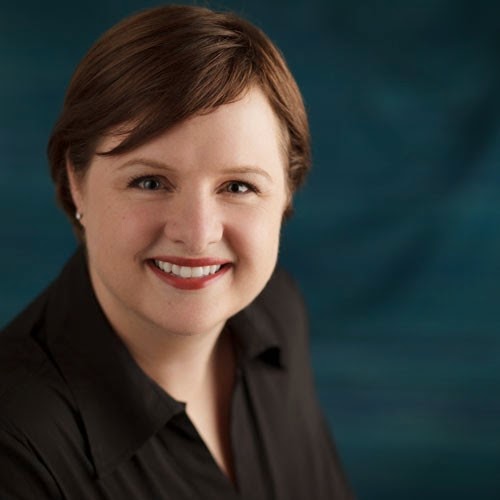 Heidi Joy Trethway Bio: Heidi Joy lives in Happy Valley off Sunnyside Road. She swears she did not make that up. Heidi’s obsessed with storytelling. Her career includes marketing, journalism, and a delicious few years as a food columnist. Media passes took her backstage with several rock bands, where she learned that sometimes a wardrobe malfunction is exactly what the rock star intends. You’ll most often find Heidi Joy with her husband and two small kids cooking, fishing, exploring the Northwest, and building epic forts in their living room. She loves to hear from readers via messages at facebook.com/author.heidi.
Blog | Twitter | Facebook | Author Goodreads | Revenge Bound Goodreads

Exclusive Excerpt:
Violet pushes Jayce away for fear that his celebrity could cause her naked pictures to go viral. But Jayce keeps pushing—to protect her and connect with her. As Jayce tries to convince her to let him get closer, he traces her lips with his finger.

He tastes like steak and salt. My lips close around his index finger and I watch his caramel eyes darken. My teeth keep a subtle pressure around his first knuckle, holding him as I suck.
What am I doing? His erection presses into my belly, hot and hard like the rest of him. Jayce could be my own personal furnace, his blood runs so hot beneath the taught skin that makes me tingle with every touch.
His hand fists tighter in my hair, drawing my head back, exposing my neck to him. If we were in a vampire movie, this is the precise moment when he’d bite.
Our eyes lock together, a battle of wills without words, as I try to decipher what he’s saying to me. He promised he wouldn’t touch me, then he grabbed me when I wouldn’t sleep in his bed. And now we’re touching—God, we’re doing a whole lot more than touching. With every brush of our bodies the friction sparks more electricity.
I suck hard on his finger, willing him to understand the conflict warring inside me. I want him, but I can’t have him. Not on my terms, not ever. The threat of my pictures going public because of my association with him would blow away every shred of my reputation, and most likely my father’s as well.
The sad truth is that the best I could ever be to Jayce is some casual, closeted one-night stand. Considering his reputation, that’s probably all he wants from me.
And I don’t want that. I want more.
I want the kind of depth that lets me trust someone to tie me up without the fear of a camera. I want the kind of person who would protect me first, last, and always, damn his reputation.
Brady wanted me for what I could do for his reputation. When I left him, posting my naked pictures was his insurance that I’d never undermine him. They’re an ever-present threat to keep me silent about all the things—the ugly things—I learned about him in the ten months we were together.
I release Jayce’s finger from my mouth and his chest rises in little pants, visible by the city light that filters through the darkening sky.
Jayce drops his hand from my hair, his expression unreadable. “Go get ready for bed. I’ll wash the dishes.”
“Yes, sir.” I lift my gym bag off the bed and walk to the bathroom, putting an extra sway in my hips, leaving that taunt between us. Sir. I know he felt it the first time, but I don’t know if he caught its full meaning.
Does he understand me? Does he know what I need?
I scrub my face and let out a frustrated breath. I hardly know what I need. All I know is that one moment, tied up, was one of the most erotic of my life.
And I’m desperate to feel that again.
But Jayce runs hot and cold, one moment controlled, the next, controlling. He’s gentle and harsh, sweet and biting. I need to know how to bring out the beast. If it’s in him.

Enter Heidi's giveaway!!!
a Rafflecopter giveaway
Posted by -Amber N. at 7:30 AM