Today we have the cover reveal for Stina Lindenblatt’s LET ME KNOW. This is the gorgeous sequel to Tell Me When.

About the Book:
This shouldn’t be happening again…
Amber Scott thought her screaming nightmares would end now that her stalker is locked up and awaiting trial. But they return when her slam-dunk case starts to fall apart. Explicit letters she allegedly wrote surface, suggesting she was the mastermind behind her assault, a willing victim.
Amber only feels safe in the arms of her boyfriend Marcus, the one person she can lean on. Until damning evidence from Marcus’s past collides with the case and the media circus drags them both down. To protect Amber’s reputation, Marcus has only one option: end their relationship. He won’t risk further damage to her case, even if it means breaking her heart.
Amber has to find the strength to step into the spotlight and bring awareness to victims’ rights before she’s convicted in the court of public opinion. And she’s really not sure what’s worse—that her kidnapper could walk free, or that the seemingly endless attention and speculation will drive Marcus away permanently…


See how it all began for Amber and Marcus in Tell Me When. 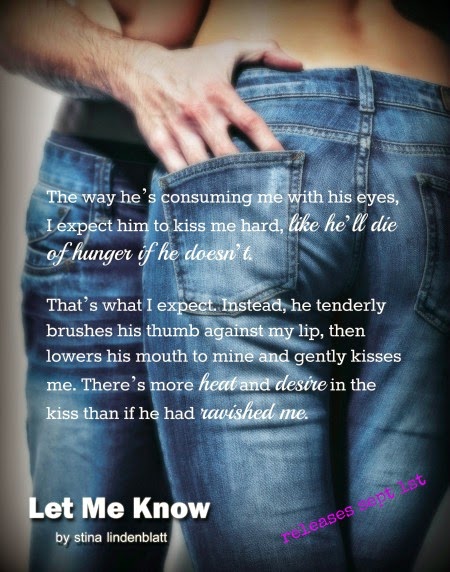 About Stina:
Born in England, Stina loves to travel, and has lived in England, the US, Canada, and Finland. She spent a semester in graduate school living in central Finland, and a summer during her undergrad degree working in Helsinki. She has a Master’s of Science degree in exercise physiology and has worked with elite athletes. In her free time, Stina is a photographer, mother of three adorable kids, and devoted wife. She currently lives in Calgary, Canada.
Website | Facebook | Twitter | Pinterest | Author Goodreads

About Tell Me When:
Amber Scott should be enjoying life as a college freshman. She should be pursuing her dream of becoming a veterinarian. She should be working hard to make sense of her precalculus math class.
She shouldn't be waking up her college roommate with screaming nightmares. She shouldn't be flashing back, reliving the three weeks of hell she barely survived last year. And she definitely shouldn't be spending time with sexy player Marcus Reid.
But engineering student Marcus is the only one keeping Amber from failing her math course, so she grudgingly lets him into her life. She never expects the king of hookups will share his painful past. Or that she'll tell him her secrets in return, opening up and trusting him in a way she thought she'd never be able to again.
When their fragile future together is threatened by a stalker Amber thought was locked away for good, Marcus is determined to protect her—and Amber is determined to protect Marcus…even if that means pushing him away.
Tell Me When Goodreads | Amazon | Barnes and Noble

Exclusive Excerpt:
Amber
When I was younger, and believed in Santa, I would wake up at four every Christmas morning. I would then sneak into Michael’s room, and we would tiptoe downstairs to check out the presents Santa had left while we slept. I never had to wake my brother. He was always waiting for me.
Like the little girl I used to be, I wake to find my alarm clock glowing 4:00 a.m. While I’m no longer the girl with the brother eagerly waiting for her, I’m still the girl who sneaks downstairs to peek at her gifts.
And in this case, Marcus.
We haven’t had a chance to be intimate since he arrived less than forty-eight hours ago, beyond small, chaste kisses or hugs. After almost losing him, I’m happy we can have even those. But they haven’t been enough to stop my nightmares.
The only sound greeting me as I creep downstairs is the soft thud of my bare feet against carpeted steps, and the slight rustle of my pink satin robe. Underneath is one of my gifts to Marcus: matching pink satin panties and bra.
The soles of my feet touch the cold tile floor and I pause. Once I’m positive Mom’s mom senses haven’t kicked in, and she’s realized what I’m up to, I tiptoe toward the guest room and inch the door open. The room is dark, other than the faint glow from the Christmas lights next door.
As my eyes adjust to the darkness, I spot Marcus sleeping. I stand in the doorway, wondering how I got so lucky. If I hadn’t been failing my math class last term, I might never have given him a chance. A chance to prove he’s more than the sexed-up guy everyone assumes he is. While I might not be thrilled that so many girls on campus are intimately familiar with his body, a warmth floods through me at the thought that he’s mine.
“Are you planning to stand there staring at me,” Marcus murmurs, “or did you have something else in mind?” His tone is teasing and edged with a desire to do things to my body. Things that will leave me beyond satisfied. My breath hitches and I struggle not to melt away.