Review: Into The Still Blue

Into The Still Blue by Veronica Rossi

5 out of 5 stars
The conclusion to the Under The Never Sky series was one of my most anticipated books of 2014.

In Through The Ever Night Aria, Perry and Roar were faced with several challenging situations, including the loss of a loved one. Perry goes through a time when he questions how much Aria really loved him in the wake of her leaving without a word, and this could have very well weakened their relationship and love for each other.
Perry has finally won the respect of the Tides and together with Aria was able to rescue Talon and Clara as well as Soren and a group of dwellers from a collapsing pod after being left to die there by Hess. 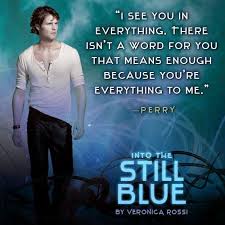 Now Perry and Aria back at the cave must work with both groups, outsiders and dwellers, so they can collaborate with each other and leave their pre-conceptions aside so that they can all look for a way to make into the Still Blue before it’s to late.

First task at hand is rescuing Cinder, who was taken by Hess and Sable to help them cross into the Still Blue given his power over the Aether. When Roar returns it is not the happy reunion one would have expected, Roar is barely talking to Perry and seems pretty furious with him, this doesn’t really helps the matter at all.
Perry and Aria don’t have many other options other than to go after Sable and Hess and try to get what they got if they have any hope of finding the Still Blue.
They need their hovers, supplies, pilots, coordinates and most important of all, they need Cinder.
To successfully carry out their plan Outsiders and Dwellers have to find a way to work together, if though it’s proving hard to do, especially between Soren and Perry.

Aria will run into someone that she never thought she would run into and in the least likely place.
Roar will make a rush decision driven by rage and need for revenge that may end up costing everyone’s life.
Soren will have to decide where his loyalties lie.
Perry will have to trust Soren even when everything inside him is telling him not to.

Even if they succeed Perry will face the impossible decision of having to sacrifice Cinder to get to the Still Blue. The answer seems simple, their world is a dying world, and dying fast, saving hundreds with the sacrifice of one should be the way to go especially for Perry being the Tides’ Blood Lord.
But when that very grim time comes will he be able to sacrifice his friend to save everyone else and himself?

Into The Still Blue was packed with action and my heart was lodged in my throat from beginning to end.
In Through The Ever Night love gets tested, in Into The Still Blue friendships are and all they have left in the end is the hope that even if they make it Outsiders and Dwellers will find a way to live in harmony.
It was the perfect ending to this epic adventure. I will miss Aria, Perry and especially Roar (I’ve had a crush on him from the very beginning I must admit).

Thanks Veronica Rossi for this amazing story that I will never forget!

Remember! Sophie Jordan is one of the authors that we are taking questions for. We will be chatting with her at one of her Dark Days tour stops along with Tahereh Mafi, Veronica Rossi, and Kiersten White. You can email your questions, leaven them in a comment, tweet them, or even leave them on instagram or message us on tumblr! You have no excuse so speak up and let your voices be heard! I promise, ask any author and they'll answer that they love hearing form their fans, almost every single time.